What an amazing weekend! My friend Melissa and I flew out on Friday afternoon and arrived at Laguardia airport around 1:30pm. We got a cab right outside the airport and headed into the most traffic EVER (lol not really, but it was pretty busy). The cab took us to our hotel, Pod 51 ….which was exactly like it sounds, small and pod-like. We had bunkbeds which they, as most hotels do, put a way cuter room on the website than what we actually got, but we knew what we were getting ourselves into when we booked a pod. We each had our own T.V. (but mine didn’t work

) and a shared bathroom with that entire floor. The shared bathroom really wasn’t that bad, it locked and there were 4 on the floor, we never had to wait for anyone so that was nice, but I must say, I did miss the convenience of being able to walk right into the bathroom from inside our room. The hotel itself was adorable, very boutique-ey and very clean. We changed our clothes and refreshed our faces and left to go stand in line at Pier 94 (where IMATS was being held) for the Pro-card event. The Pro-card event is the night before the actual general admission IMATS. If you have the card, it is because you are a professional or a student who will be a professional. You are able to be among other pro artists and shop without crazy lines. 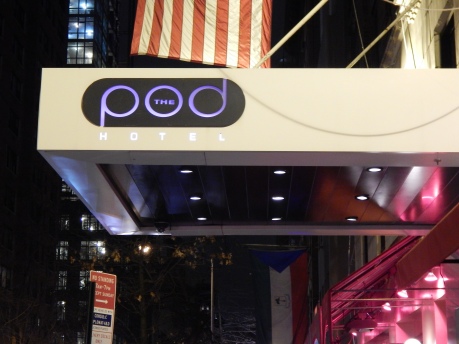 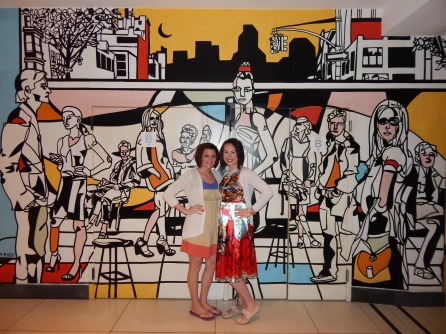 We were starving but of course didn’t have enough time to sit down and enjoy a nice dinner, so we stopped at a hotdog truck….so, there’s that…… Once we walked 1.7 miles to the Pier, I had blisters and was instantly regretting not wearing running shoes with my dress (what we do for beauty). While in line, we met 2 amazing women, who actually didn’t know eachother before that day. We were so blessed to have such amazing weather, it made standing in line that much more tolerable. I think it was about 70 with a little bit of wind, perfect for standing in line…outside lol. Once we made it inside, I can’t even describe the feelings we had! We were overwhelmed, excited, amazed….Booths of product everywhere; makeup, brushes, spray tan, skin care, airbrush systems, glitter, setting sprays..OH MY GOSH! It was heaven and I suddenly forgot everything I planned to buy. We went to almost every booth there! 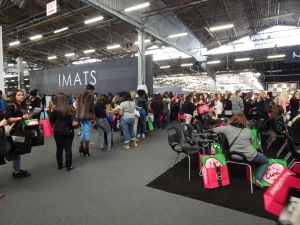 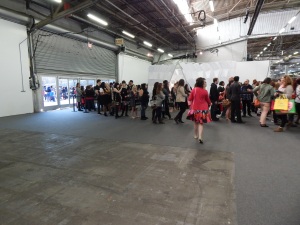 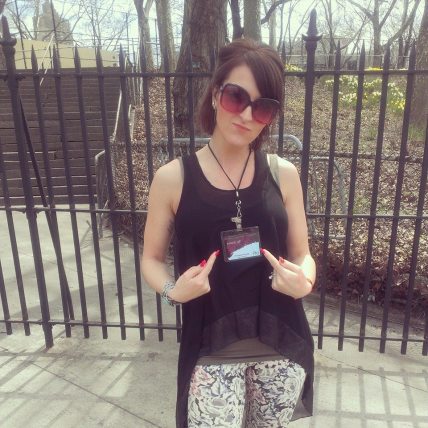 We left the Pro-card event around 7:30pm and headed back to the hotel because we had too many bags that needed to be dropped off before we went to check out Time Square. We got a cab and headed off for Time Square which was just such an awesome experience. Melissa promptly pointed out the steps that the Glee cast danced on in an earlier episode, but sadly I couldn’t remember that particular epsoide 😦 So, I had to look it up and found this—-> (stairs from GLEE) 🙂 We were right by those stairs! Okay, that stuff excites me….We did some exploring and started discussing how it would be so cool if we could catch a broadway show while we were there (we were leaving sunday at 7:20am). After exploring, we went to this amazing restaraunt down the road from our hotel called Ashton’s Alley, this was the best meal while in New York, that we got to experience…sadly.

Saturday morning we got ready and headed back to the Pier. We decided not to walk the whole way because I had a huge blister on my pinky toe and my feet were killing me. Once we got there, the line was triple the size it was the night before but I wasn’t surprised about that. This was the day general admission tickets were accepted, which were sold out in the blink of an eye months before. Inside there were so many people and huge lines had already formed but we were there for the speakers and the education.

We got to see 3 key note speakers:

Eve Pearl- Five-time Emmy winner, she has done make-up for television, film, theater and print. Her work has appeared on Today, The View, Good Morning America and the Academy Awards. Her book Plastic Surgery without the Surgery: The Miracle of Makeup Techniques is a must-have for beauty insight. Pearl created the Eve Pearl cosmetics line and has worked with celebrities including the Obamas, Arianna Huffington, Justin Timberlake and Barbara Walters.

Kanesha Perry- From retail to the runway, Kanesha Perry has been beautifying clients for more than 17 years. She truly believes in beauty from the inside out, whether it be celebrity clients, editorial, fashion- week shows or helping the everyday client find the perfect hues. Perry believes that personal divinity radiates from within us all.

Kevin James Bennett- Created IN MY KIT® a cosmetic buying guide for professional make-up artists, and Makeup Art + Design Enterprises Inc, a cosmetic consulting company focusing on product design and development, brand strategy, copywriting, sales promotion and more. Bennett has worked on retail, print, runway and celebrity projects. His television work has earned him five Emmy nominations and two wins. His credits include the Law & Order franchise, Another World and As the World Turns. He has appeared as a beauty expert on programs including Access Hollywood, Entertainment Tonight, Good Morning America and Today, and his beauty advice has appeared in Elle, InStyle and Town & Country.

Because of the limited amount of time we had in New York, we decided to leave IMATS early and go experience the city, since we both had never been before. We went to Battery Park and got a picture of the statue of liberty, we went to SOHO for some shopping, we went to resale shops (which are so much more amazing than what we have around here), we went into Coyote Ugly and did a shot, then danced on the bar for a minute (it was Coyote Ugly….how could we not?!), we walked past lots of bums, lots of graffiti, a lost weave, horse drawn carriages, endless food trucks, crowds EVERYWHERE—oh, apparently the President was in town to see a show so they had a bunch of roads closed off, which was quite annoying because we had to keep walking out of our way to get around it all.

It was getting closer to 8pm (which is when most of the broadway shows start) so we went on a hunt for a show we wanted to see but of course we couldn’t find any of the theatres. We checked out Wicked but the tickets were $179 and they only had single tickets. We ran down the sidewalk to find where Cinderella was showing and found Chicago but decided to keep looking for Cinderella. Once we found it, they only had single tickets as well. We sprinted back to Chicago and got tickets but we were starving, so we then ran to get a piece of pizza…okay, Melissa sprinted to get pizza and I instagrammed a picture of the Chicago sign, then I jogged behind her lol. We scarfed a piece of pizza and got into the theatre. The show was so amazing.

After Chicago, we were exhausted but decided because it was our last night, we were going to keep wandering the city. We checked out the M&M’s store (which is 3 levels), the Disney store, and Forever 21—the biggest Forever 21 I’ve ever been in AND it was open until 2am. We really didn’t go into any other stores, we were just so enthralled by everything we were seeing. We got back to the hotel around 2am and started packing, went to bed at 2:30am and woke up around 4:30am to get ready for our flight.

So, that was our very short weekend! Everyone we met along the way was so great and friendly, and the weather was perfect. It was all such an awesome experience. I can’t wait to go to IMATS again and visit New York again 🙂